i am online checking out the new Pearl Jam album...i am listening to a bit of each song...they are all terrible...i am sad about that, because i had read a really good review of the album in the paper...

'An Awesome Book' by Dallas Clayton...

Thanks to Valerie over at Evolve Happy I have discovered Dallas Clayton and his book 'An Awesome Book'. I am in love. I just bought two copies. Read this book. Feel your mind/heart expand. Hug somebody. 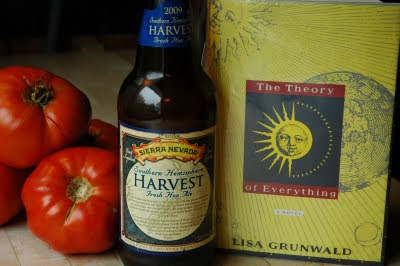 With tomatoes...
Sierra Nevada Brewing Company has done it again. Their new Harvest is a fresh hop ale; the hops from New Zealand, picked and flown to California. Delicious.
I picked up Lisa Grunwald's book 'The Theory of Everything' at the library booksale quite a while back. I've been on a fiction kick this summer, so began reading and got sucked in to the story quickly. Read until some time past midnight, even though I had to get up at 5:00 a.m. the next morning!

it is night and i am outside, walking toward my partner who has just called out to me to come over to where he is sitting against a fallen tree...as i settle down next to him, he tells me to look at the sky...there above the treeline, the night sky is visible full of stars, bright and lovely...as the cloud cover moves by, i see two vivid falling stars, one white & one red...i excitedly mention this to him...i see a few more falling stars, none as bright as those two however...i sigh with contentment at the beauty of the night sky... 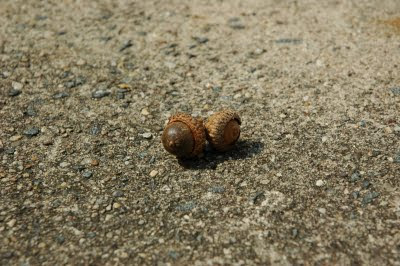 Our cat Tyga brings us an acorn every morning. She carries it up from the woods to our front doorstep. Usually it is just an acorn cap, but this summer she has taken to whole nuts. This morning's offering is a lovely two-fer. Thank you, Tyga-boo.

Source: Hubblesite.org
Posted by sandi at 7:56 AM No comments: 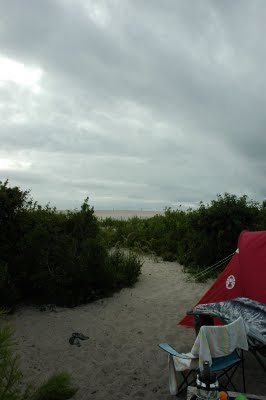 Growing up, my parents and I went to Assateague Island, Maryland every summer. Usually in July, as my Mom always had that month off from work. We had a home-made camper on the back of our four-wheel drive International Harvester "Scout", and we would go as far down the island as allowed, and camp right there. It was fabulous. I loved it.

I had not been there since 1989. Unbelievable, but true. Somehow I knew that I had; HAD, to go this summer. So my daughter, my dog and I went; the last weekend of August and into the first week of September. It was a total healing experience. All the depression that had been affecting me since late Summer 2008 just melted away as soon as we hit the beach. I felt centered and alive. It was also the Full Moon that week, so I was inspired as well.

Rhiannon & I took early morning walks every day. The surf was rather rough, so she did not enjoy getting in the water. We still made a game of it, and enjoyed ourselves. She was into the sandpipers, that was her favorite beach experience.

Melian got a bit of sunburn the second day, but that did not deter her from having a very enjoyable time. At one point she asked me, "Mommy, we are coming back here next year, right?" To which I responded with a enthusiastic, "YES!" I had taken her to Rehoboth Beach in Deleware, and Virginia Beach before, but this was her first trip to Assateague. She dug the ponies and the Sika deer. We had a campsite rabbit pal, and red-wing blackbird visitors.

Is it next summer yet?